The Big Shot TV Sitcom is loosely based on Steve Emirzian’s experiences working at a Hartford TV news station and the crazy work environment he comically suffered through. The story of a man attempting to better his life while pursuing a career in a pretend one. In an industry where art imitates life, remembering who we are and what we stand for can be confusing.

“In an industry where art imitates life, remembering who we are… and what we stand for… can be confusing.”

How it all started…

The Big Shot·Friday, September 27, 2019·
The concept for THE BIG SHOT came about when I went back to working in television after a 15 year hiatus.

I had worked at almost every news station in Connecticut. But, after a decade and a half of being out of the circuit, I found out the industry had changed dramatically. No longer was there a SWAG BAG waiting at my desk for the new employee. No tours of the new facility, nothing. Those days were gone. In fact, I had to beg for a station coffee mug. Apparently, their value increased like gold in the time I was gone. Little things, like the fact the bathroom was on the opposite side of the building, and a 60 second commercial break just wasn’t going to give me the time to do my business, seemed odd. As a CLOSED CAPTION SPECIALIST, I soon learned that enunciation was paramount. That a slight cough or mumble could easily jeopardize FCC rules if I wasn’t careful. I started taking notes on a legal pad of all the funny, ridiculous and bizarre things that caught my attention at work. Eventually, this became a treatment, and, shortly after that, a pilot script.

The tag line for the pilot is: “This is the story of a man trying to better his life, while pursuing a career in a pretend one. In an industry where art imitates life, who we are and what we stand for can be confusing.”

The main character, (again, loosely based on me) is tired of his go-nowhere job where no one appreciates him and no matter how hard he tries, he can’t seem to move ahead. Soon, Fate steps in and, thanks to his now successful college professor and best friend, Dave Emerson is about to be offered the chance of a lifetime. The opportunity to produce a hit Hollywood action series right in the same building he currently works in. But is it a dream come true, or a festering nightmare? Dave Emerson soon finds out that dreaming for success and living it are two vastly different things. Who can he trust? How far will he go ethically and emotionally to make his dream come true? What is normal in a world where vacuous Hollywood celebrities lie to your face, sleep with anything that moves, and make promises they almost never keep? 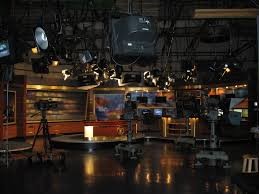